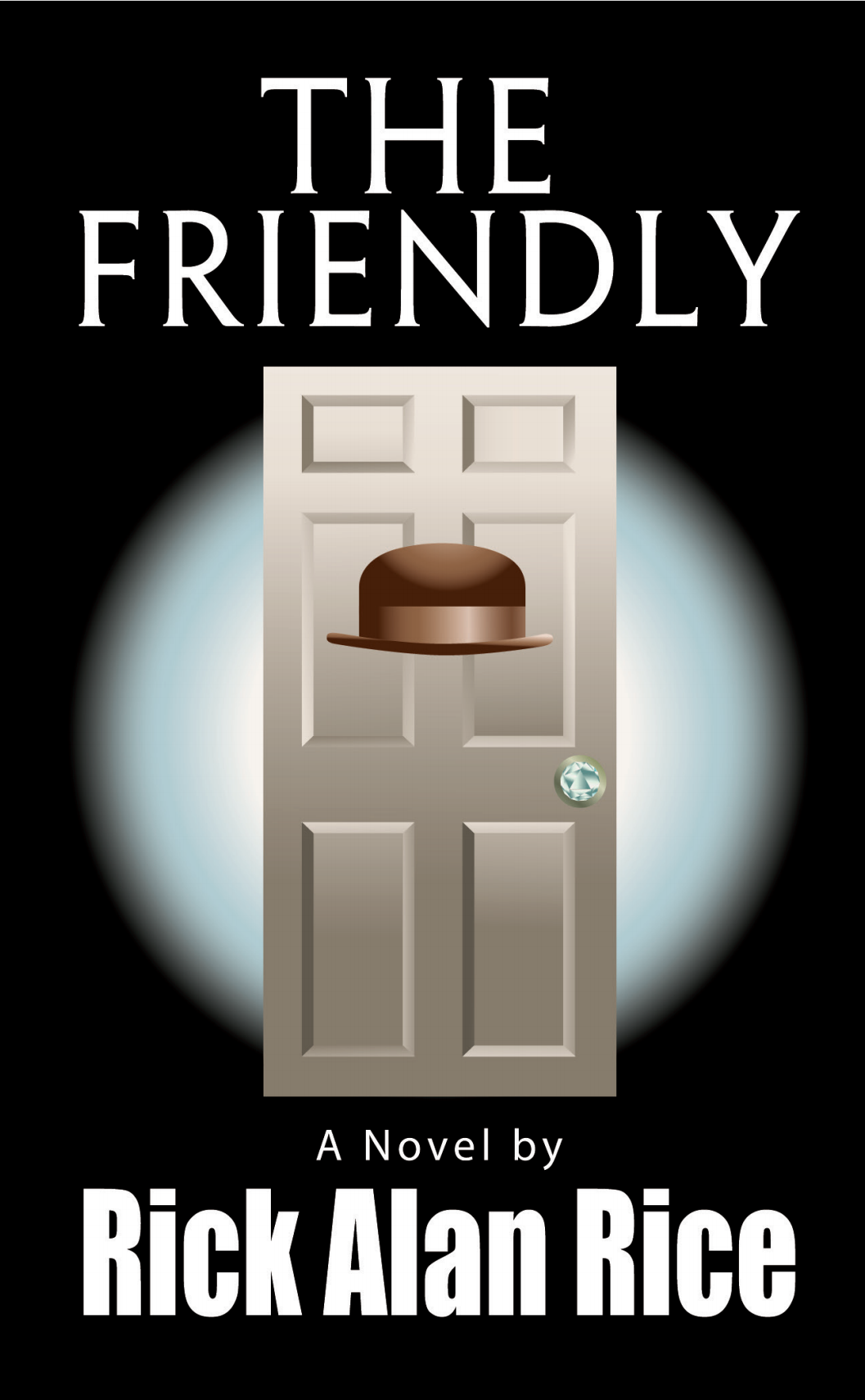 Prepare for "The Friendly"

Irene Lindley - ninety-nine years old and confined to her room in failing health - knows there is a little man in her closet. Who he is and how he gets into her house unseen by her caregivers is a mystery. All she knows is what he tells her - that he is preparing the space for “The Friendly”. In this very personal, real-life account, Rick Rice explores that which awaits our immortal souls as we pass from this realm we know to the next. “The Friendly” fires the imagination, entertains, delivers chills, and leaves the reader thinking deeply about our mechanical universe..

Introduction to The Friendly

“The Friendly” is a short novel that I wrote while being the guy in the novel – living in the home of my mother-in-law in the final year of her life. It was a strange experience in a strange environment, perfect for writing in the darkest hours of the morning, with death palpably near and shadows moving all around the old home.

“Nanny”, as we called her, was confined to her bedroom upstairs. I would work my technical writing job all day, working remote from her house, and be there to watch over her around the clock. I would bring her breakfast, lunch, and dinner, and see to her needs, fetching stuff, setting the shades just right to meet her extremely specific demands. I would watch TV with her, keep her company, though she couldn’t hear a thing.

She would say odd things. One day she said something to my wife about preparing the closet for “the friendly”, and so this story was born. Much of what is in this story actually happened. The rest is the produce of an exhausted mind, a spooky nature, and an over-active imagination.

There were wonderful people that were a part of “The Friendly”, and some unsettling ones. There was also a kind of magic at work, which I suppose would be familiar to anyone who has been there for the slow, protracted decline of a loved one, and for those final moments. I loved the lady in this story – knew her for a long time – though it was not always clear that she was nuts about me. A bonding took place with her in that last year, along with a kind of spiritual transfer of energy. I saw my own mother in Nanny and tried to make up for all I had failed to do for my Mom when she went through this same experience. People need help to get through life, and I suspect they also need help as their spirits pass from one place to the next. In fact, I suspect that there is a whole universe of people – a mechanical universe – that requires assistance. Some people are especially adept at providing the services required. One such wears a bowler hat, and it was him who Nanny told us was in her closet, preparing for “the friendly.”

Anyone who enjoys a terrifying ghostly yarn will find it hard to put down this small masterpiece called The Friendly by Rick Alan Rice.

The story is a deeply personal, real-life account about events that happened to the middle-age author when he took on the role of caregiver for his about-to-turn one hundred, mother-in-law. A dynamo throughout her extremely long life, the charismatic Irene Lindley has finally reached the point where she can no longer fend for herself.

For complex reasons, Rick moves out of his own home, leaving behind his wife and adult children, and moves into Irene’s mansion located in a once affluent neighborhood that has badly deteriorated over the century. As the story opens, Irene is confined to her bed upstairs. Rick and Irene are alone in the house where access in and out is tightly controlled by a high-end burglar alarm system that prevents anyone, including a loopy neighbor, from getting inside. While seeing to Irene’s needs, Rick keeps up a full time tech job working remotely by computer. Exhausted and sleep deprived, he becomes even more unsettled when Irene begins complaining that a little man in a bowler hat in her bedroom closet is “preparing a space for The Friendly.” One part-time caretaker who truly wants to assist Irene and Rick, flees from the mansion, terrified by its creepy atmosphere.

In this chilling, first-person account, Rice weaves together two themes which seamlessly merge at the book’s end: what it means to help a beloved, elderly person die, and the presence of weird forces that, obeying hidden laws of a mechanical universe, converge when a great soul passes from one realm to the next.

Rice is a masterful story-teller who knows how to get the juices of fear churning in a reader’s stomach, but also leaves us wiser at the end of the ride.

The Friendly on Amazon

The author of The Friendly is Rick Alan Rice, a California-based writer whose work is available on Amazon and many other outlets. Rick offers novels, screenplays, and a huge portfolio of original music compositions.