This page provides an overview of novels presently available or soon to be published. Contact me at Rick@RARWRITER.com for additional information.

CCJ Publisher Rick Alan Rice dissects the building of America in a trilogy of novels collectively called ATWOOD. Book One explores the development of the American West through the lens of public policy, land planning, municipal development, and governance as it played out in one of the new counties of Kansas in the latter half of the 19th Century. The novel focuses on the religious and cultural traditions that imbued the American Midwest with a special character that continues to have a profound effect on American politics to this day. Book One creates an understanding about America's cultural foundations that is further explored in books two and three that further trace the historical-cultural-spiritual development of one isolated county on the Great Plains that stands as an icon in the development of a certain brand of American character. That's the serious stuff viewed from high altitude. The story itself gets down and dirty with the supernatural, which in ATWOOD - A Toiler's Weird Odyssey of Deliverance is the outfall of misfires in human interactions, from the monumental to the sublime. The book features the epic poem "The Toiler" as well as artwork by New Mexico artist Richard Padilla.

Book Two in the trilogy is titled "The City By the Lake". This traces the history of our fictional Atwood into the middle part of the 20th Century, with a continued focus on the development of religious attitudes in America, the influence of the freemasons and the big government programs of the "Great Depression". It continues the story of the controversial Rev. A.S. Thorne and his relationship to the exotic Elizabeth Newberg, the mother of his gifted son who will play a central role in the unfolding story.

Book Three in the trilogy is titled "The Marion Hotel", which brings the story of Atwood and its extraordinary characters in the latter half of the 20th Century and its "modern era". The final book in the trilogy explores the author's personal experiences in this magical, fictional place on the plains of Kansas. 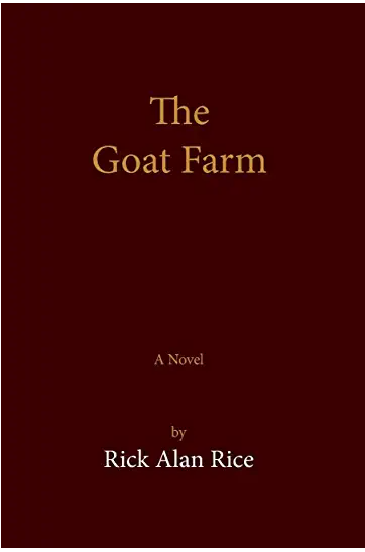 The Goat Farm may be in its own genre as a work of satirical, esoteric, erotic, horror. Filled with supernatural spirits, this is no work for children, and will even be jarring to some adult readers. It follows the lives of a senior couple from the San Francisco Bay Area who move to an enchanted farm in the Sierra foothills: The Goat Farm.The property has a character all its own, from its grand rusted entrance, to the huge metal sculpture of Kali that stands watch over the area, to the strange lagoon with its floating island, to the energized stone meadow with its natural hexagonal arrangement of granite altars. It is hypnotic, trance-inducing, spirit-capturing.The Goat Farm leaves readers thinking deeply about the cosmic forces at work in our lives, and in our minds. And getting there is great fun for those who enjoy fantastical fiction.

Irene Lindley - ninety-nine years old and confined to her room in failing health - knows there is a little man in her closet. Who he is and how he gets into her house, unseen by her caregivers, is a mystery. All she knows is what he tells her - that he is preparing the space for "The Friendly".

"Cooksin - Crime and Redemption in the New West"

Weld County, Colorado - 1950. Ranchers and farmers become prey to a criminal enterprise organized to rob them of their equipment, livestock, and personal property. At the middle of the criminal conspiracy is Jake, a hard-luck case and inside operative who hopes to leverage personal relationships that he establishes "on the job" to extricate himself from the evil ambitions of a crime boss who otherwise controls his destiny.An homage to the Film Noir cinematic style of the 1950s, and the crime novels of Elmore Leonard, Cooksin is a suspenseful, funny, and soulful look at the redemptive powers of love and family devotions. It is corny like a Frank Capra film, a romantic sojourn into the heart of innocence, and an exploration into the capacity of love to overcome the hardships of life lived hard on the western plains.

READ MORE: Cooksin - Crime and Redemption in the New West

A renowned designer of land forms, a city planner, examines the end of his life, and the underlying reasons for the traumas he experiences, with a final global tour of important sites, where the "hand of man" might reveal for him some answer to it all and perhaps gift him with the serenity he desperately needs for his final scene.